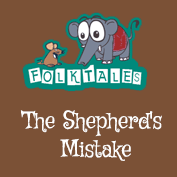 One day, the shepherd saw a big stray wolf in the field and noticed that it was eyeing his sheep. He became very concerned and careful. The wolf, however, stayed at a distance and made no effort to come close to the sheep. The shepherd did not take any risk; he stood guard against the wolf and observed its movement very carefully.

A few days had passed like this, and the wolf did not do anything. When the shepherd went home after grazing his sheep, the wolf would quietly follow them at a distance.

Every morning, as the shepherd took his herd for grazing, he would find the wolf waiting in the corner of the field. The shepherd was a little concerned in the beginning, but gradually he relaxed as the wolf never made any attempt to attack the sheep. Eventually, he eased his guard on the sheep, as he did not feel threatened anymore.

This continued for some time. The wolf always sat on a large rock, and looked like a big sheep dog from a distance. The shepherd started feeling that the wolf acted as a protector of his herd, as other animals were scared of the wolf and would not come near his sheep.

One day, while the sheep were grazing, the shepherd was called home urgently, due to some emergency. He left the sheep in the guard of the wolf and rushed back home.

When he came back, he was shocked to see that there were only a few sheep wandering in the field, while the rest were missing. He then looked around and saw that there were half eaten carcasses of sheep everywhere. He realized that the wolf had eaten up almost all his sheep.

The shepherd sat down quietly. “Serves me right,” he said sadly, and cursed himself for trusting the wolf with his flock of sheep.