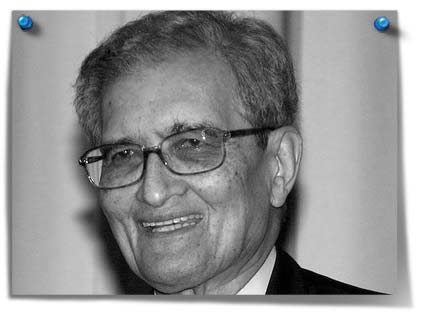 Who is Amartya Sen?

Amartya Sen is an Indian economist who was born on November 3, 1933. He is well known for his contributions to welfare economics and social choice theory, and for his interests in the problems of the poorest members of society.

Amartya is perceived as “The Conscience and the Mother Teresa of Economics” for his work on famine, human development theory, the underlying mechanisms of poverty and gender inequality.

In 1998 he was the recipient of the Nobel Memorial Prize in Economic Sciences for his contribution. He has helped create the United Nations Development Index and in 2012, he became the first non-American recipient of the National Humanities award.

Amartya Sen is currently the Thomas W. Lamont University Professor and Professor of Economics and Philosophy at Harvard University.

100 Most influential persons in the World

His books have been translated into more that 30 languages over a period of 40 years. Time Magazine in 2010 included Sen in their list of “100 most influential persons in the World”.

Amartya Sen was born to a Bengali family in Shantiniketan, West Bengal. Rabindranath Tagore is said to have given his name “Amartya” which means immortal.

He was born to Amita Sen and Ashutosh Sen who was a Professor of Chemistry at Dhaka University. Sen began his schooling in Dhaka, then later moved on to prestigious Presidency College of Calcutta where he emerged as the most eminent student of that batch of 1953. He then later went on to the Trinity College in Cambridge where he completed his Ph.D. in Economics.

Work as a professor

After completion of his Ph.D., Sen became a professor at the Massachusetts Institute of Technology. He was also a visiting Professor at UC-Berkeley, Stanford, and Cornell.

His work in the field of development economics has had a significant influence in the formulation of the Human Development Report, published by the United Nations. This annual publication ranks countries on a variety of economic and social indicators and it owes much to the contributions by Sen.

Governments and international organizations handling food crises es’ have been influenced by Sen’s work. His views encouraged policy makers to pay heightened attention to those suffering but also to finding ways to replace the lost income of the poor through public-works projects, and to maintain stable prices for food.

A vigorous defender of political freedom, Sen believes that famines should not occur in functioning democracies because their leaders must be more responsive to the demands of the citizens. In order for economic growth to be achieved, he argued, social reforms, such as improvements in education and public health, must precede economic reform.