You Are Here : Home » Learn » New World » Answer me » Do we age differently in Space?
DOWNLOAD 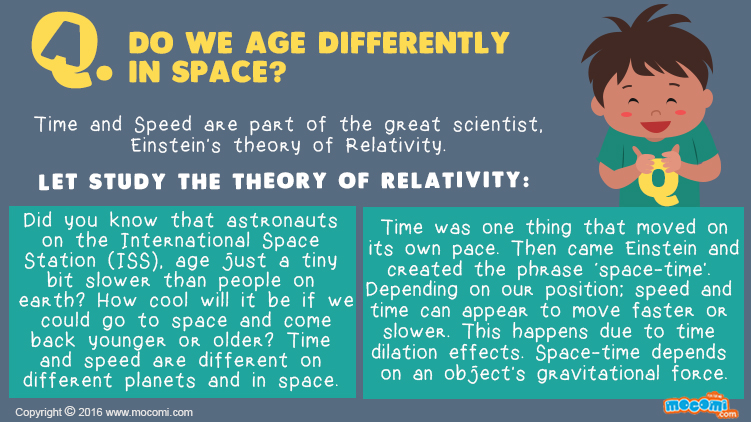 Time and Speed are part of the great scientist, Einstein’s theory of Relativity.

This happens due to time dilation effects. Space-time depends on an object’s gravitational force. As the gravity of an object increases, time moves slower. If you notice, time passes slower in places which are near the center of the Earth, as the gravitational pull is stronger.

The astronauts living on the ISS are floating 260 miles above the Earth, where the gravitational pull is weak. So basically time should move faster for them. But the space station is also going around the earth at 5 miles per second. Here the velocity time dilation has a greater effect than gravitational time dilation. Thus astronauts end up aging slower.

But the difference isn’t much. Astronauts have aged 0.005 seconds less than the rest of us on earth.

Your age on other Planets

You will age slowest on Mercury, Venus and Jupiter as they are slower than Earth. You will age a couple of minutes faster on Mars as it is less massive and has less gravity than Earth.

Get more information about Theory of Relativity, Visit: https://mocomi.com/theory-of-relativity/

Why do we fall ill?

Where do Phobias come from?

Why do Bats hang upside down?

Why are Duck feathers waterproof?