You Are Here : Home » Learn » New World » Answer me » What makes the Moon Shine at Night?
DOWNLOAD 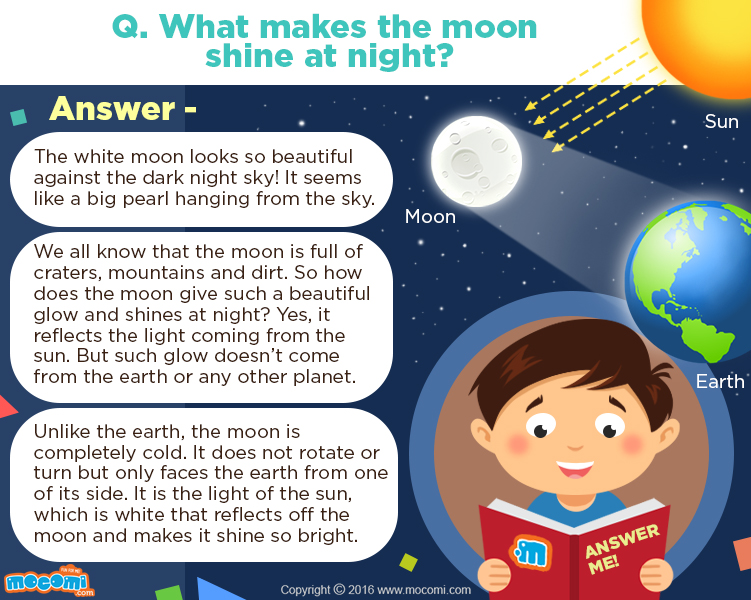 What makes the Moon Shine at Night?

Why does the Moon Shine?

In reality the surface of the moon is completely dark gray in colour. Because of its dark colour and a bumpy surface, the moon is able to only reflect 12% of the light that falls on it. The amount of light that bounces back on the earth depends on the orbit, time and place of the moon.

How does the Moon reflect Sunlight?

The moon orbits around the earth. When the moon’s orbit put it in direct forward facing towards the earth, it reflects a larger amount of light, thus making it shiny. This is mostly during a full moon night, when the moon is so bright that it outs fainter objects at bay. When the moon is closest to the earth, it is called a super moon as it is almost 20% brighter than usual. As the orbit of the moon changes, the angle of the light changes and less light is bounced back on the earth. During the other stages of the moon only 8% of the light is reflected.

Did you know that the moon is slowly moving away from the earth? Thousands of years ago the moon was closer to the earth and our ancestors saw a brighter, bigger and shinier moon.

Click here to know more about the Venus Occultation by the Moon.

Why Dogs Bark at Cars?

Why do we get Nervous?

Why do our best ideas come in the Shower?

Where does the Sun go When it is Dark?