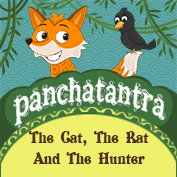 Once upon a time, there was a huge banyan tree. An owl, a mongoose, a cat and a rat used to live in or around this tree. All four were scared of each other. The owl feared the cat, the mongoose feared the owl and the cat, and the rat was scared of all three—the owl, the cat and the mongoose. Still, the four animals continued to live in the same place.

One day, a hunter laid a snare under this banyan tree hoping to catch some animal. He set the trap and went to wait at a distance. Soon, the cat walked there, looking for the rat. She stepped on the snare and before she could realise, she was trapped in the net. Seeing this, the mouse became very happy. He went out of his hole and started dancing in joy around the trapped cat.

The owl and the mongoose both saw the rat prancing about and wanted to catch him for their meal. Both of them started approaching him. The rat noticed them but it was too late. They were already quite close and there was no way that the rat could run back to his hole. There was only one way that the rat could think of—to enter the trap along with the cat and persuade her not to kill him by offering to nibble through the net. The rat had to take a quick decision. As the owl and the mongoose came closer, the rat thought that this was his last hope of survival and he quickly entered the trap alongside the cat.

The cat was just about to pounce on the rat when the rat said, “Please spare my life. If you don’t kill me, I can help you to get free from this trap. I will nibble the net at many places and you can easily escape.” The cat agreed and let the rat stay with her inside the trap. Seeing the rat with the cat, the owl and the mongoose went away. When they were gone, the rat chewed through the net with his sharp teeth and both of them got out of the net. The cat ran away into the forest and the rat quickly got into his hole.

The next day, the cat came to meet the rat. But the wise rat refused to come out of his hole saying that friendship between enemies is only a temporary thing. They will ultimately always remain enemies.