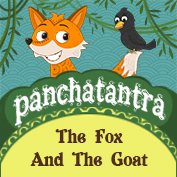 There was a fox called Dabbu. One day, he was very happy after having a hearty meal. He had seen the lion going for a stroll after his meal and had gone into the lion’s den and gorged on the remains of the lion’s feast. It was a sumptuous meal of deer meat. “I wish I was lucky enough to have such a feast every day,” Dabbu thought.

Dabbu started walking, looking at the clear sky, singing his favorite song, much contented with his lovely meal. He thought about film heroes and how they would sing and walk like this when they were in love.

Dabbu wasn’t in love, but he thought that the emotional satisfaction obtained from a good meal was no less than the feeling of being in love. Dabbu’s eyes were almost filled with tears as myriad emotional thoughts crossed his mind, when he suddenly found himself falling into something really deep.

“Dhuuummm, dhumm,” the sound came, and Dabbu understood that he was in trouble. On looking around he realized that he had fallen into a shallow well. He was lucky that there wasn’t much water in the well. It was a wide mouthed well that Dabbu had noticed every day while passing by it. It was only today that he was in  lost in his thought and had simply overlooked it. Dabbu was really angry at himself for being so foolish and careless and wanted to hit himself.

He tried his best to get out of the well by climbing on its walls, but all in vain as the walls were too slippery. Frustrated, he waited for someone to come to help.

Suddenly, Dabbu heard a squeaky voice, “What on earth are you doing down there?” Dabbu looked up and much to his relief he found Laadla the goat standing at the mouth of the well. He was a young and gullible goat. Dabbu knew that Laadla was innocent and ignorant of the world, as he was always asking very irritating questions. Dabbu was determined to get out of the well using Laadla’s help.
It has never been difficult for a fox to fool a goat. He said, “Aren’t you aware that there has been a huge drought in the northern part of Bihar (they lived in a jungle in Bihar)?” “Really? I haven’t heard of anything as such,” said the innocent goat. Dabbu replied, “That’s strange. Shantaram crow gave me the news this morning and he has also seen it with his own eyes as he was travelling from the same area. That is why I jumped into this well to save some water for myself.”

“Oh God, how terrible!” exclaimed Laadla and jumped into the well in no time. As soon as Laadla jumped into the well, Dabbu climbed on his long horns and jumped out of the well.
Dabbu said, “You are such a silly creature. You are not even aware that there have been floods all around the northern part of the country, and you believed my story of a drought. Instead of talking about a frog in a well, now people will talk about a goat in a well.”

Laadla was stupefied and said to himself, “One should never trust anyone blindly.”

Moral: As Laadla concluded, you should think for yourself rather than blindly believe what others say.