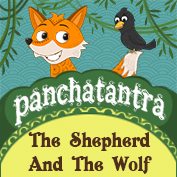 Once, a shepherd used to live in a village. He was the owner of a large flock of sheep. Every morning, he used to take his flock out for grazing. Once, because of some work, he had to go to the city for two to three days. So, he called his son, Ramu and told him that he would have to take care of the sheep for the two-three days that he would be away. “Take good care of the sheep, Ramu,” his father warned him. “There are many wild animals like tigers and wolves in the forest nearby who might kill our sheep. Keep them safe, son. They are your responsibility.”
Ramu assured his father that he would follow his advice. The next day, Ramu took the flock of sheep to the hillside for grazing. While the sheep were grazing, Ramu started feeling bored. Being a mischievous boy, he wanted to have some fun. He thought of an idea. He stood up and started shouting, “Help! Wolf! Wolf!”

Ramu’s cry for help was heard by the villagers. Carrying big sticks with them, they rushed to the spot to help the boy. But, on reaching, they found that there was no wolf. Ramu laughed and said, “There is no wolf here. It was just a joke I played on you.” The villagers went back to their homes, irritated.

Next day, the same thing happened. The villagers heard Ramu crying for help and went to help him but again, they found that the boy had tricked them again. This time, the villagers were very annoyed and went back to their homes, cursing the boy.

On the third day, when Ramu took his sheep for grazing, a wolf actually came there. The wolf looked so ferocious that Ramu was terrified. The wolf was advancing towards the sheep. Ramu shouted, “Help! Help! Wolf!”

The villagers heard Ramu’s cry and though that it must be the boy’s silly trick once again. No one went to help him. Ramu could not keep the wolf off the sheep all by himself. The wolf killed many of Ramu’s sheep. Ramu went back to his home weeping.

This story tells us that people do not believe liars. This is why it is said that we must not lie.