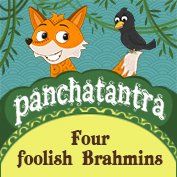 In a certain town, there lived four Brahmins who had become great friends. They decided to go to Kannauj to pursue their higher studies under the guidance of a learned guru. They took great pains to acquire knowledge but unfortunately, neither did they have logical thinking, nor could they understand the real deep meaning of the ancient sayings.

In due course of time they completed their studies and decided to venture out in the world. They sought permission from their guru to go back to their homes. Their guru happily granted them his consent and advised them to consult the holy book, if they ever had a problem. The Brahmins touched the feet of their guru and left from there.
After they had been travelling for a short time, they came to a place where two paths met.

They could not decide as to which road they should take. Just then, they saw a funeral procession of a rich merchant. Many prominent citizens of the nearby town were going in that procession.
One of the Brahmins consulted his holy scriptures and read: ‘Whichever road is followed by great men is the right one to follow.’ The Brahmins then equated the prominent citizens with great men, and decided to follow the funeral procession. Soon they reached the cremation ground, where while the other people started getting busy in cremating the body, the Brahmins did not know what to do next. They started idling around the cremation ground. Soon, everybody left for their homes, and only a donkey was left standing alone in the cremation ground.

Now the second Brahmin consulted his holy scriptures and read: ‘Whosoever stands by you on all occasions, whether joyous or sad, is your true friend.’ So they came to the conclusion that the donkey was their true friend. And then, the Brahmins started showering their love and affection on the donkey. Meanwhile, they saw a camel marching quickly towards them. Since they had never seen a camel, they started to wonder what kind of an animal or deity it was.
The third Brahmin opened his holy book and read out: ‘Dharma moves very fast.’ He then said, “This thing is also moving very fast. It must be Dharma.” Then, they thought that they must introduce their friend donkey to Dharma as it would be a noble deed. And so, when the camel approached, they tied them up together.

The camel was flustered at being tied up with the donkey and started running fast, dragging the donkey behind it. The donkey started braying loudly in pain. The donkey’s master, a washer man, heard the donkey’s braying and came running to the spot. He picked up a stick and ran after the four learned fools to beat them. The four Brahmins ran for their lives.

They kept on walking till they reached a river. They wanted to cross the river, but did not see any boat nearby. One of them suddenly shouted, “Look, there is a leaf floating in the water. My holy book says if we catch hold of any floating object, we will not drown.” And saying this, he jumped on the leaf. He did not know how to swim and soon started to drown.

One of the Brahmins jumped in the water to save him, but was unable to drag him to the shore because of his weight. He then remembered a quotation from his holy book: ‘If we cannot get back anything completely we must try to retrieve at least half of it.” With this literal meaning in mind the foolish Brahmin cut off his friend’s head, killing him instantly.

The remaining three Brahmins kept wandering on, until they reached a village. The villagers warmly welcomed them. Three of the villagers invited each Brahmin to their own house for lunch.

One of the Brahmins was served with sewaiyan (spaghetti). The Brahmin looked at the long and thin shape of the sewaiyan and remembered a quotation from the holy books: ‘The Dirghasutri (meaning’ lazy’ but having literal meaning long and lean) is easily destroyed.’ The foolish Brahmin thought that he may also get destroyed by eating sewaiyan. And so, he did not touch the food and went away hungry.

The second Brahmin was served with fresh roti. The foolish Brahmin consulted his holy book which said, ‘Round and flat things decay very soon.’ He thought, “If I eat this roti which is round and flat, then I will also decay and die very soon. So, he too left his food and went away hungry.

The third Brahmin was served with vadas. The vadas were made of dal and had a hole at the centre. He remembered what he had read in his book, ‘Holes lead to problems.’ And so, the third Brahmin also left his food and went away hungry.

Eventually, the three foolish scholars remained hungry and everybody made fun of them.