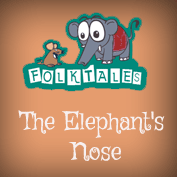 Many years ago, the elephant’s nose was not as long as it is now. It was merely the size of a boot, which the elephant could twist from side to side. But an elephant’s baby changed it forever.

The baby elephant was extremely inquisitive and curious and always had a question for everyone.

He asked the giraffe, “Why do you have spots all over your body?”

And to the ostrich he said, “Why do your tail feathers grow like that?”

He also asked the hippo why its eyes were so red and to the baboon he asked why melons tasted the way they did.

One day, he was getting very curious and asked what the crocodile eats for dinner.

“Hushhhh,be quiet,” said all the animals with fear .But the baby elephant was not going to keep quiet. He kept asking he same question to everyone he met.

One day, he came across the Kolokolo bird and she told him where he could find an answer.

“You will find your answer in the green, grey and greasy Limpopo River,” she said.

The baby elephant started his journey, with his back laden with a lot of sugarcane, melons and bananas.

After a very long and tiring journey, he finally reached the river.

He was walking along the edge of the river, when he suddenly stepped on something that looked like a log of wood. But that something started moving its tail and the baby elephant stepped down hurriedly. Suddenly it blinked and opened its mouth.

The elephant looked at the creature and asked him innocently, “Have you ever seen a crocodile here?I have been searching for one for a very long time.”

“Then I must say you are lucky, I am the one you were looking for,” said the crocodile.

The baby elephant jumped with excitement! “Then can you tell me what do you have for dinner?” asked the elephant excitedly.

The crocodile splashed its tail in the mud filled water and said, “I will definitely tell you, but only if you come closer.” The baby elephant was excited and brought his ears closer to the crocodile.

At once the crocodile leaped and caught the nose of the elephant with a strong grip.

The baby elephant was scared. He tried pulling his nose back, but the crocodile wouldn’t let go.They both started pulling from both sides, and the elephant’s nose kept stretching and stretching.

Finally the crocodile gave up and swiftly went into the water.

The baby elephant fell back with a jerk. He was tired and sat down on the bank. Suddenly, he noticed that his nose was longer than before. He realised that it had kept growing longer as the crocodile was pulling it.

The elephant was in pain. He waited for his nose to shrink by wrapping it up in banana leaves.

However, it never shrank. Since that day, the elephant’s nose remained like that, very long.