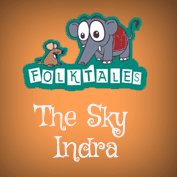 Lord Indra is a Hindu God and is believed to be the king of all Devas. He is the God of thunder and rains. He is also referred as a creator God as he provides Earth with water in the form of rain. In the early Vedic period, Indra was considered to be the Sun God.

It was later that Hindus associated him with thunder and rain. Indra possesses a powerful celestial weapon, Vajra which makes him a remarkable warrior. Vajra is believed to be made up of sage Dhadichi’s bones.

Lord Indra is depicted as a fair man with four arms. He is known by many names across the world like Purandara, Sakra, Swargapati, Vajri, Meghavahana. His ride is the divine elephant, Airavata who is as huge as a mountain and has four tusks.His wife’s name is Indravati and he has six sons namely, Jayanta, Midhusa, Nilambara, Rbhus, Rsabha, Sitragupta. His attendants are called Maruts.

Indra’s most famous deed was his triumph over demon Vrita.Vrita had taken form as a dragon and had consumed all of Earth’s water. Indra vowed to kill the demon and return water to Earth. Indra consumed Soma to attain power and a great duel followed between Indra and Vrita. Indra won the battle and tore open the demon’s stomach, so all Earth’s water fell back on Earth.

A phase came in Lord Indra’s life when he decided to give up wealth and honour in order to become a hermit and attain wisdom. Indravati requested Brahaspati to stop his husband from giving up the life of a king. Brahaspati then convinced Indra that he can pursue true wisdom while fulfilling his duty as a king and taught him the qualities of worldly and spiritual life.