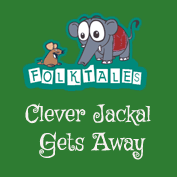 A very long time ago, a jackal was walking through the jungle, sniffing the road in some hope of finding his next prey. It had been quite long since he had had his last meal. It was unlikely that he would come across a rat or a rabbit, as it was an extremely hot afternoon, but he was at least expecting to find a lizard.

Suddenly, he heard the sound of leaves and branches crumbling. He stood still for some time and then realised that it was the sound of Bhubeshi, the lion approaching towards him. The lion was too close for the jackal to escape from him. He remembered the number of times that he had tricked Bhubeshi in the past to escape from him. But this time, the jackal was sure that this was the end. It was a great opportunity for Bhubeshi to take revenge on him. But the quick-witted jackal immediately thought of a plan.

“Please help me, or else I will die. Is anyone there?” screamed the jackal. The lion who was walking his way stopped at once. The lion looked here and there and saw the jackal, cowered on the ground with both his paws over his head.

“What happened to you?” asked the lion, growling.

“Please help me. Can you see those huge rocks up there? They are just about to fall on us and will crush both of us to death. Oh mighty lion, you are the only one who can save us. It’s only you who can hold those rocks with your great strength.”

The lion looked up at once. He saw the huge rocks and immediately leaped towards them. Then he put his strong and muscular shoulders and held the rock with all his strength.

“Please hold on to those rocks while I go and find a log to keep under the rock to stop it from falling on us,” said the jackal and disappeared from there.

The lion waited for a long time with the heavy weight on his shoulders only to realize that even this time he had been tricked by the witty jackal.

Thus, the jackal continued to live up to his reputation of being the smartest animal.