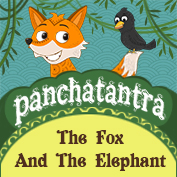 Once upon a time, a huge elephant lived in a forest. The elephant was very arrogant and cruel. He took advantage of his size and wrecked havoc in the forest. He roamed around in the jungle breaking branches and small trees with his trunk. He did not care about the fact that in this way he destroyed the nests of many birds and killed their babies. In the same way, he ruined many foxes’ homes by trampling over them with his huge and heavy feet. All the animals of the forest were terrorised by the elephant. Even the lions and tigers tried to keep clear of him. The animals had got so fed up of the elephant and his arrogant ways that they wanted to kill him but they could not come up with any way of doing this.

The chosen fox made a careful study of the elephant’s behaviour and daily routine. Then, after much thinking, he made a plan. He went up to the elephant one day and said, “My Lord, I want to speak to you about some urgent business.”

The elephant trumpeted and asked the fox, “What is it? Who are you?”

The fox replied, “Your Highness, all the animals of the forest have decided to make you our king. They have sent me to you as a messenger. I have come to escort you to the place where all the other animals are waiting for your coronation ceremony. All the preparations are in order. We are only waiting for you to arrive and then we will crown you as our king.”

The elephant was very pleased. Becoming the king of the forest had always been his dream. He readily agreed to follow the fox. The fox led the way. On the way, there was a marshy area near a pond that the fox and the elephant had to cross. The fox was light so he easily walked over the swamp. But when the elephant tried to cross the swamp, he got trapped in the marsh because of his weight. The more the elephant struggled to get out, the deeper the marsh sucked him. The elephant began to shout, “Help! Help! I’m drowning. Pull me out. Go and call all the other animals for help, quick!”

The fox, who was standing calmly at the edge of the swamp, replied, “Nobody is going to save you. This is the kind of treatment that you truly deserve. You have always been cruel to other animals and have mistreated them. You have taken advantage of your power and broken down countless birds’ nests without caring about their eggs or nestlings. You have stomped upon foxes’ burrows and crushed many foxes under your heavy feet. You knew about all the destruction and misery you were causing us but you did not care to stop. You never paid heed to our cries for mercy and so today, nobody is going to have mercy on you. It is not the day of your coronation but of your cremation.” Saying this, the fox left.

The elephant struggled for hours but he could not come out of the swamp. Finally, he drowned in the marsh and died. It is true that every tyrant has to meet his doom.