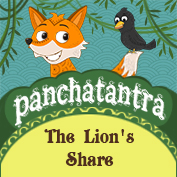 One day a fox and an ass made a deal with the lion, that they would help one another in hunting for food. This way, they would have a lot of food and none of them would have to starve.

Initially, both the fox and the ass were worried and nervous about the thought of going for a hunt with the lion, but when they imagined the share of food they would accumulate this way, they began to salivate and their nervousness disappeared in a jiffy.

They made a fantastic plan for the hunt. According to the plan, the ass would first keep an eye on the animal they could hunt. Once he spotted a prey, he would go up to it and start talking. The bray of the donkey would alert the other two.

Their plan was successful and it was time for the much awaited meal of the day. The food looked delicious and the trio looked extremely happy and hungry. The lion ordered the ass to allot each of the partners their due share.

The ass was overwhelmed by the lion’s gesture of asking him to delegate the share. Very carefully the ass divided the booties into three equal shares. “Now you may start enjoying your meals friends,” said the ass and started licking his share hungrily.

The lion, however, was not very happy. He looked at the share for some time, “You guys really think that each one of us deserves the same share? You think your mere attempt of talking to the animal can be compared to my effort of killing it?” said the lion and pounced on the ass and killed it instantly.

The lion then asked the fox to distribute the food. Terrified, the fox made two divisions and gave the lion almost all that was accumulated leaving a minor share for him. With a feeble voice, he told the lion, “Now you can have your share, sir.”

The lion looked at his share carefully. Then, pleased with the division, the lion said to the fox, “You did an excellent job of delegating the share. I am impressed.”

“Thank you, sir,” he replied. “I learnt a lesson by seeing the fate of the ass.” The frightened fox quietly left with his share and decided to never enter into any agreement with the lion in the future.

Panchatantra: The Wolf And The Lamb