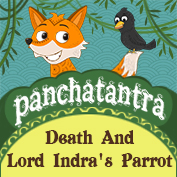 Once all the gods were having a conference in heaven. Lord Indra was seated on his majestic throne. On the arm of his throne sat his pet parrot whom he loved dearly.

The Lord of Death replied, “I do not have any authority in such matters. You will have to speak to Destiny about it.”

So the gods turned to Destiny and requested her to spare the parrot’s life. But Destiny said, “I’m afraid the decision of the parrot’s life and death does not lie with me. The final judgement in this matter will be passed by Death. You will have to approach her with your request.”

So, finally the gods referred the matter to Death. As soon as Death looked at the parrot, it died. All the gods were very sad.

The Lord of Death spoke to them consolingly, “Death is the final destiny of every living being. Be it a king or a pauper—everyone has to die eventually. There can be no escape from this universal truth.”