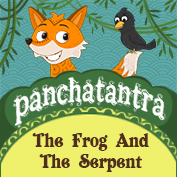 Once upon a time, a king frog used to live in a well with his family and subjects. The king frog had some evil relatives who wanted to snatch the throne away from him. They kept causing problems in his reign. Once, they conspired with a minister in the king frog’s court and started a revolt against the king frog. The king frog managed to subdue the revolt but he was very angry. He wanted to take revenge on his evil relatives and unfaithful subjects. He thought of a plan. He came out of the well and made his way to a hole where he knew that a big, black snake used to live. He called out to the snake.

The snake was surprised to hear a frog calling him and slithered out of the hole. The frog said to the snake, “Hello. I want to be your friend.”
The snake was astonished. “How can a snake and a frog be friends?” he said. “We are natural enemies.”

“Listen to me. I have a plan,” said the frog and told the snake all about his evil relatives. “I want to teach them a lesson,” he added. “So, I will take you to the well and you can eat all of them.”

The snake was interested. “Is there water in your well?” he asked.

The frog replied, “Not much. But a little above the water level, there is a hole in the wall of the well. You can live there comfortably and eat my relatives.”
The serpent agreed. He followed the frog back to the well. On reaching there, the frog said, “Here are my evil relatives. You can eat all of them except my near and dear ones.”
Thus, the serpent started living in the hole in the well’s wall. One by one, he started eating up the frogs that were pointed out by the king frog. In a few days’ time, the snake had eaten all the evil frogs and only the king frog and his family were left. The snake came up to the king frog and said, “I have eaten up all your evil relatives and rebels as you wanted. I have also eaten your unfaithful minister. Now, there is nothing left for me to eat except you and your family.” Saying this, the serpent eyed him hungrily.
The king frog realized his mistake. He knew he was in great danger. He had made friends with his natural enemy for his selfish motives and to punish his enemies. Now he felt that his own death was near. But he managed to keep his cool and replied, “Do not worry. I will go to some other wells and ponds and persuade some frogs to come and live in this well. Then you can feed on them.”

The serpent liked the idea. “Hurry up, then. I am hungry,” he said.
So, with this pretext, the king frog and his wife came out of the well and ran for their lives, vowing never to return to that well again.