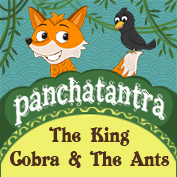 Once upon a time, a king cobra used to live in a forest. He used to feed on birds’ eggs and small creatures like lizards and frogs. During the night, he used to hunt for his food and in the morning he used to slide into his hole to sleep. Gradually, he started growing fat. Over a period of time, the cobra became so fat that it started becoming difficult for him to crawl in and out of his narrow hole.

So, he decided to leave the hole. He went to a huge tree and decided to make his home there. But, there was an anthill near the roots of the tree. The king cobra did not like this. He went to the anthill and, being big and powerful, he ordered all the ants to leave the place and go away at once. Many other small creatures who lived on the tree were frightened when they saw such a huge snake. All of them left their homes and went to stay somewhere else.

But the ants were not scared of the snake. Thousands of ants came out of the anthill and started crawling over the king cobra’s body. Soon, they had covered his whole body. They stung him all over his body, causing him immense pain. The king cobra tried to shake the ants off but he couldn’t get rid of them. Finally, the king cobra died a painful death. It is rightly said that even the strong and mighty cannot tackle the small ones if they are in a large number.

Panchatantra: The Sun And The Wind