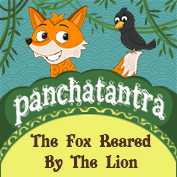 Once upon a time, a lion couple lived in a dense forest. The lioness gave birth to two cubs in due course of time. The lion asked her to stay the den and look after the cubs and started to go out for hunting alone. One day the lion could not hunt any animal but found a little fox on the way home. When the lioness saw the baby fox, she was filled with compassion. She had recently become a mother and did not have the heart to eat somebody else’s little one. She told the lion, “He looks so much like our cubs. Let us spare his life and rear him like our own kid.” The lion reluctantly agreed and from then on the lion couple raised the baby fox with their other two cubs.

The three young animals grew up playing and eating together like brothers. One day the children saw an elephant. The cubs were scared to see the giant elephant and they whimpered back to the den. But the foolhardy fox kid stayed back and growled at the elephant. On reaching home, the fox mocked at the lion cubs for their cowardice. Mamma lioness watched all this with concern.

That night when the children slept peacefully, she told her husband, “I don’t think baby fox should stay with us now. Today he was teasing our kids but as they are children they will soon forget everything and start playing with each other again. But tomorrow, if the fox behaves like that again, the cubs will tear him apart.” The Lion nodded in concurrence.

Early in the morning Mamma lion lovingly called the baby fox and told him, “My kid, we love you a lot and are concerned about your welfare. We cannot change the fact that you are a fox child and not a lion. Soon when your brothers will grow up, this den will no longer be safe for you. For your happiness and safety,you must join your fox family.”

The baby fox understood the matter. With a heavy heart, he departed from his foster family. Mamma Lion was also very sad to see him leaving but was content to know that he was safe somewhere in the jungle with his kith and kin.