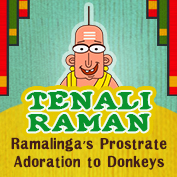 King Krishna Deva Rayalu had a royal teacher by the name of Thathacharya. Thathacharya belonged to the Vaishnavite sect, the followers of which worship Sri Maha Vishnu as the Supreme God. Thathacharya was very defiantly opposed to the Smarthas who follow the tradition instituted by Sri Adi Shankaracharya.

Whenever Thathacharya stepped out of his house, he used to cover his face with his cloak so that he would not have to look at any Smarthas. This annoyed the people of the town a lot and they nicknamed him ‘stupid ritualist.’ The learned Smarthas and other people of the town wanted to teach Thathacharya a lesson for humiliating them but were afraid to do so, as he was the royal teacher of the king. After a lot of pondering, they finally decided to entrust this job to Tenali Raman. Together, all the learned people went to Tenali and asked him for a solution to their problem. Tenali Raman thought that it was a difficult task but he assured them that he would do his best.

Around the same time, King Rayalu also became aware of Thathacharya’s mannerisms and how they were hurting the sentiments of the rest of the public. He was concerned that this may lead to communal differences in the kingdom. So he, too, summoned Tenali and said, “I am going to entrust you with a very important and confidential task. It has been brought to my notice that Thathacharya is humiliating the Smarthas by his mannerisms and behaviour towards them. People are disgusted with him. I cannot take any action against him personally because he is an elderly person and is also my family teacher. So, it is now up to you. You must find a solution.”

Tenali Raman replied that he would do his best to bring about a change in Thathacharya’s behaviour towards the Smarthas.

The next day, Tenali paid a visit to Thathacharya. Thathacharya was just about to leave his house and on seeing Tenali, he started covering his face with his cloak. Seeing this, Tenali said loudly, “Dear Master, I am your beloved disciple. Why are you covering your face?”

Thathacharya replied, “Tenali Rama, since you really are my beloved disciple, let me tell you a secret. The Smartha culture is full of sin. Whoever looks at a Smarthite will be born as a donkey in the next birth. This is why I cover my head and avoid looking at Smarthas. Keep this a secret, don’t reveal this to anyone.”

Tenali promised to keep this knowledge secret and left. He was overjoyed as he had finally found a way of teaching Thathacharya a lesson. Now, he just had to wait for the right opportunity.
A few days later, King Rayalu along with Thathacharya, the ‘Ashta Diggajas’ and some other courtiers went on a leisurely picnic to a garden on the outskirts of the city. After spending the day there, when they started returning, they saw a large herd of donkeys coming their way. Seeing this, Tenali Rama left the king’s side and rushed forward towards the donkeys. He fell prostrate on the ground and started paying homage to the donkeys.

Everyone present, including the king, was astonished to see Tenali’s behaviour. The king shouted, “Tenali, have you lost your mind? Why are you paying respect to those donkeys?”

Tenali Rama replied, “No, Your Honour, I have not gone crazy. All these donkeys are Thathacharya’s ancestors and relatives. I feel so blessed on seeing them reborn as donkeys. They have been reborn as donkeys because of their sin of having looked at Smarthas in their previous birth. This is why Thathacharya covers his face to prevent himself from the sin of seeing Smarthas. If you do not believe me, you can ask him yourself.”

King Rayalu looked at Thathacharya for an explanation but Thathacharya just stood there with his head hung low in shame. From that day onwards, Thathacharya stopped covering his face on seeing Smarthas or humiliating people from different traditions or cultures in any other way. King Rayalu was impressed the way Tenali Rama dealt with this difficult situation and felicitated him with a reward.