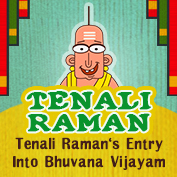 Tenali Raman or Tenali Ramalingam was a minister in the court of the king of Vijaynagar, Krishnadeva Rai. Tenali Rama was a great scholar of several languages that included Marathi, Tamil and Kannada. He was popular all over the country for his wit and great sense of humour. Stories about Tenali Raman and his practical jokes on everyone around him including distinguished fellow poets and the emperor himself,are very famous all over the southern part of India.

Tenali Raman was very mischievous in his childhood. One day, the provincial ruler happened to visit Tenali’s academic institution for the annual inspection. He questioned the children in Tenali’s classroom, “Who among you is the most intelligent?”

There was pin drop silence in the classroom. None of the children could muster up the courage to answer the king’s question. Meanwhile, Tenali sprung up from his seat and answered with confidence, “Sir, I am the most intelligent student in the class!” The king was extremely impressed with the little child’s self confidence and blessed him saying, “You will go places my child!”
And it indeed happened so! When Tenali grew up, he made his presence felt in history by the virtue of his wit and sharp intellect.

Coming back to the story, young Tenali garnered advanced knowledge of several languages. He was proficient in the art of poetry and had a sound knowledge of the ancient texts. He wanted to be a part of Raja Krsihnadeva Rai’s royal court. Thus, one day he approached the royal priest Thathacharya and exhibited his skills before him. Thathacharya promised Tenali that he would introduce him to the King Rayalu, but did not keep his word.

Tenali was disappointed, but started looking for other ways to gain entry into the court. He met another scholar from the king’s royal court, Nandi Thimmana and displayed his talent in spontaneous poetry before him. Thimmana was highly impressed and felicitated Tenali by presenting him with a Kashmiri pashmina shawl, which was presented to him by King Rayalu.

The next day, Tenali adorning the Kashmiri shawl on his shoulders, walked into the royal court. King Rayalu surprised to see a stranger carrying the priceless shawl that he had gifted to Thimmana couple of days before.

The king asked Tenali, “From where did you get this shawl?”
Tenali Raman bowed down before the king and politely replied, “His Highness! Thimmana has satisfied you with his talent and expertise in his field. I was fortunate enough to please that great personality with my poetry and receive this priceless shawl as a reward. I am wearing this shawl to exhibit my competence.”

Sri Krishnadeva Rayalu was impressed by the way Tenali presented himself in the court and granted him a permanent place in the royal court. This is how Tenali entered Bhuvana Vijayam.