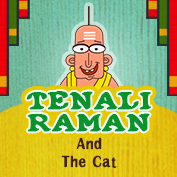 A long time ago, king Krishna Deva Raya had a very wise minister in his court by the name of Tenali Raman. Once, the kingdom faced a major problem of rats. Rats had multiplied to a very large number and were creating a lot of destruction. They were nibbling through important papers, clothes, grains in food stores, etc. There were not many cats in the kingdom to catch all the rats. So, the king asked all the houses in the kingdom to keep one cat each. But cats feed on milk and not every house owned a cow to get the milk. So, the king also gave cows to every house. The people were happy and brought up the cows and the cats. They used to give a lot of milk to their cats.

But Tenali Raman was a lazy fellow and he was also very fond of drinking milk. He wanted to keep the milk from the cow for himself. So, he thought of a clever trick. He boiled the milk and poured it in a pan. Then, he put this pan in front of the cat. As soon as the cat touched the boiling hot milk with its tongue, its tongue got burned and it ran away at once. Tenali repeated the same thing the next day and again the day after that. After a few days like that, the cat refused to touch the milk that was offered to it for fear of getting its mouth burned. In this way, Tenali got to drink all the milk himself.

One day, the king ordered for all the cats to be brought before him for inspection. While everyone else’s cats were fat and healthy, Tenali’s cat looked thin and weak. The king was very angry with Tenali for not taking proper care of the cat. But Tenali pleaded, “Your Majesty, I cannot help it. My cat does not drink any milk at all.” The king said, “Nonsense, I will put you in prison for telling a lie.” Tenali requested the king to give him a chance to prove it and the king agreed.

So, Tenali brought his cat and the pan of milk in front of the king. He offered milk to the cat. But on seeing the pan of milk, the cat ran away, frightened. The king was surprised at this but he let Tenali go. Tenali lived happily, enjoying lots of milk by himself.