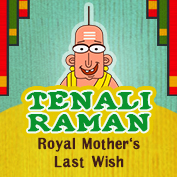 It was Krishnadeva Rai’s mother’s death anniversary and he wanted to do something special for his deceased mother on this day. He summoned the head priest to discuss the same. The head priest took this as opportunity to earn money. He asked the king what his mother’s last wish was. The king said, “My mother used to love the mango fruit. On her last day also, she wished to eat a mango, but she breathed her last before the fruits could reach her.” On hearing this, the cunning priest said, “Your Majesty, your mother’s soul will rest in peace if you fulfill her last wish. As she is no more, you can do an alternate thing. You must give away 108 mangoes made of pure gold placed in 108 silver bowls to 108 Brahmins in alms. This will definitely make her soul happy and she will shower her choicest blessings on you.” The king agreed to the priest’s proposal and soon 108 golden mangoes were made and distributed amongst the Brahmins.

When Tenaliram came to know about this, he understood that the priest had taken undue advantage of the king’s feelings towards his mother and decided to teach him a lesson.
One day, Tenaliram called the head priest and said that he wanted to give alms in the memory of his expired mother. The priest was elated on getting another opportunity to fill his pockets. Tenaliram also invited Krishnadeva Rai for the ceremony.

When everybody had come, Tenaliram took a red hot poker and went to the head priest. He said, “Dear sir, my mother was suffering from pain and wanted a red hot poker to be placed on her hand. But, she died before her wish was fulfilled, so I request you to let me perform the act on you, along with all the Brahmins whom you brought, so that her soul rests in peace. If you permit let us begin the ….”

Even before Tenaliram could complete his sentence, the head priest including the other Brahmins vanished from the scene, giving various types of excuses to him. The king realized that he was duped by the head priest and thanked Tenaliram from the bottom of his heart for revealing the true character of the priest.