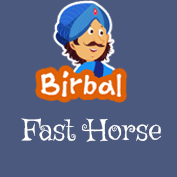 The story is of the time when Raja Birbal did not have a personal horse or a carriage to bring him from his home to the Emperor’s court. One day, Akbar saw him coming on foot and promised to give him the fastest horse from his royal stable. Accordingly, he instructed the in-charge of the royal stable to give a horse to Birbal. But, just to have some harmless fun with Birbal and see his reaction, Akbar asked the stable man to select a weak and sick horse for Birbal. The stable man carried out the Emperor’s orders and delivered an old and sick horse at Birbal’s house. The horse was in such a bad shape that it died on the same night that it was delivered.

Next day When Akbar saw Birbal coming on foot again, he asked in a surprised tone, “What happened to the horse that was arranged for you from the royal stable? It was our fastest horse! Were you afraid of riding it?”

Birbal bowed and replied, “Jahapanah, it indeed was the fastest horse of all. He was in fact, so fast that he crossed the distance from earth to heaven in one night.”

Akbar smiled at Birbal’s witty reply, and got a healthy horse arranged from the royal stable for Birbal.