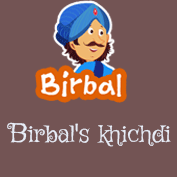 Once Akbar asked Birbal, “Tell me Birbal! Will a man do anything for money?” Birbal said, “Yes, Jahanpanah! It is possible for a man to do anything in return of some money.” The Emperor ordered him to prove it.

The next day, Birbal came to the court along with a poor brahmin. The brahmin had no money and his family had nothing to eat. Birbal told the Emperor that the brahmin was ready to do anything for the sake of money.

It was the peak of winter season and the water was freezing cold that time. The Emperor ordered the brahmin to stand inside the frozen pond all through the night if he wanted money. The poor brahmin agreed and kept standing the whole night inside the pond, shivering badly. Next morning, he came to the durbar to receive his reward.

The Emperor asked, “Tell me something! How could you stand in the freezing cold water all through the night?” The innocent brahmin replied, “Huzoor, I could see a faintly glowing light coming from your palace, a kilometre away. Looking at that light gave me imaginary warmth and strength to keep standing in the water.”

Akbar declined to pay the brahmin his reward saying that he had got warmth from the light and this was cheating. The poor brahmin went away disappointed and empty handed.

Birbal tried to say something in the favour of the poor brahmin but the Emperor refused to listen to him. Soon after, Birbal stopped coming to the durbar and sent a messenge to the king stating that he would come to the court only after he has cooked his khichdi.

When Birbal did not come to the court for five days, the Emperor himself went to Birbal’s house to see what he was doing. Birbal had lit the fire and kept the pot of khichdi one metre away from it. Akbar asked him “How will the khichdi get cooked with the fire one metre away? Are you in your senses, Birbal?” Birbal replied, “O’ Jahapanah! If it is possible for a person to receive warmth from a light that was a kilometre away, then it is also possible for me to cook this khichdi a metre away from the fire.” Akbar understood his mistake. He called back the poor brahmin and rewarded him with gold  coins.