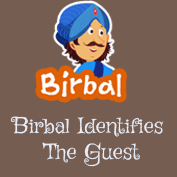 Once, a rich man invited Birbal for lunch at his place. When Birbal reached the rich man’s house, he saw that the main hall was full of many other people also. When the rich man saw Birbal at his door, he welcomed him warmly and ushered him inside the house. Birbal said, “My dear man, it seems to me that you have invited almost half of the city today.” The rich man politely replied, “Sir, they are not my guests, they are my employees. There is only one other guest here, besides you. Is it possible for you to identify who is that other guest here?”

Birbal smiled and said, “Well, I will certainly give it a shot. Tell them a joke! I will have a glance at all of them and then give you your answer.” The rich man told a lame joke and everybody laughed hysterically. It was the worst joke that Birbal had ever heard in his life. Now,The rich man asked Birbal, “I have told the joke, now you tell me who is the other guest here?” Birbal pointed out towards a man and said, “He is that other guest!” The rich man was very surprised hearing this as the man towards whom Birbal had pointed was indeed the other guest. He said to Birbal, “Dear Sir, you are absolutely right, but how did you recognize him?”

Birbal said, “It was simple! Pardon me for saying so, but only your employees could have laughed on the pathetic joke that you had cracked. This man was the only person who did not even smile on your joke, and this helped me to recognize him as the other guest.”