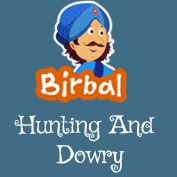 Emperor Akbar was passionate about hunting. One day, Akbar was on his hunting trip, that he heard two owls hooting in a shrill voice on the trees.Akbar asked Birbal, “Birbal, look at those two owls! They are creating such a ruckus. Can you tell me what are they quarreling about?”

Birbal said, “Huzoor, I can tell you but I fear that you may not be happy to know.
Akbar said, “Tell me Birbal, I really want to know what these birds are discussing.”

In the mean time one owl hooted once more very loudly. Akbarasked Birbal, “I see! Tell me now what is he saying?”

Birbal said, “He is the bride’s father again. He is requesting the groom’s father to give him just six months more, and then he would certainly gift him 40jungles without animals.”

Akbar said, “Really Birbal? How does he propose to do that?”

Birbal said in a grim tone, “Jahanpanah, the bride’s father says that he has come to know from reliable sources that if Emperor Akbar’s hunting sprees continue at this pace, soon all the jungles would be devoid of animals and then he would easily be able to fulfill the demand of the groom’s father.”

Emperor Akbar understood the harmful consequences of his hobby on the environment and quit hunting from that day onwards.

This is how Birbal addressed Akbar’s conscience and made him realize his folly.