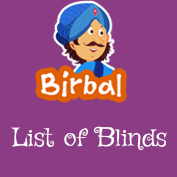 Once, the Queen wanted to give alms to all the blinds in the kingdom. Emperor Akbar wanted to be sure that none of the blinds were deprived of alms, so he directed his men to prepare a list of blind people in his kingdom.

As per order of the Emperor, a comprehensive list of the blind people was made and presented before the king. Emperor Akbar handed over the list to Birbal and asked him to make adequate arrangements for distribution of alms.

Birbal glanced at the list and said, “Your Majesty, I will do the needful. But, do you know that there are more blind people than the ones listed here? In fact, the number of blinds is far greater than the number of sighted people in our kingdom.”

Akbar said, “That is a ridiculous thing to say, Birbal! If it is true, prove it to me.” Birbal accepted the Emperor’s challenge.

The next day, Birbal took a frame of an old cot and carried it with him to the main crossing. He then, sat on the road and started weaving its rope. He had a servant with a paper and a pen, standing next to him. Soon, a courtier came and exclaimed, “Birbal, what are you doing?”

Birbal did not answer him. He just whispered something in the ear of his servant and kept at his work. A little later, some more people gathered on the street. They were extremely surprised to see Raja Birbal weaving a cot and thus, started asking all sorts of questions.

“What is wrong with Raja Birbal?”
“Why is he doing this?”
“What could be the reason behind this?”

Each time someone made a comment, the servant quickly jotted down something on the piece of paper. The news that Raja Birbal was weaving a cot on the road spread like wildfire in the city. By evening, Akbar, too, came to know about this. He went to Birbal to see for himself.

He asked Birbal in a surprised tone, “I don’t understand what you are trying to do!”

The servant again wrote down something on the paper. Birbal stood up and greeted the king. He said, “Jahanpanah, I was making the list of blinds!” He then gave the list to the Emperor to see.

Emperor Akbar was astonished to see his name at the end of the list. He asked Birbal, “Birbal, why have you included my name in your list of blinds?”

Birbal politely replied, “Your Majesty, you are also one of them! You were the last person to come and ask me that what I was doing, even though you could clearly see that I was weaving the cot.”

Akbar burst out laughing and said, “Yes Birbal, I do agree with you that the number of blinds in our kingdom is far more than the sighted people.