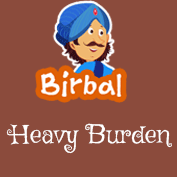 Once, a poor old woman came to seek Birbal’s help. The Emperor had passed orders to build a big palace on the site where her small house was situated. He had already instructed his men to take down the house of the old lady and ask her to move to some other place. The old woman did not want to move out of her ancestral house as she had fond memories linked with it. Birbal understood the woman’s plight and promised to try his level best to save her house.

Soon, the construction began at the chosen site. Birbal also happened to visit the construction site with the Emperor. There were many empty gunny bags lying on the ground. Birbal started to fill up the bags with mud.
.
Out of curiosity, Akbar asked Birbal, “What are you doing?”

Birbal answered, “I am doing this to earn merit in my next life.”

Amused, Akbar also joined Birbal and started filling up the bags with mud. Birbal then, loaded up a big bag with mud and sought Akbar’s help in lifting it up.

Akbar lent a hand to Birbal. “Aah,this is very heavy! I am finding it very difficult to lift it up,” said Akbar, staggering under the weight of the bag.

To this Birbal retorted, “Jahanpanah, you say that this bag of mud is heavy. Imagine how much mud would be there in this piece of land. Will it not weigh heavily on your conscience to snatch a poor old woman’s ancestral house?”

Akbar realised his mistake and gave orders to discontinue the construction. The poor old woman was overwhelmed with gratitude and profusely thanked Birbal for saving her house.