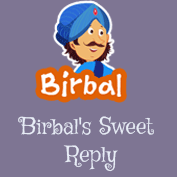 This is one of the most famous stories of Emperor Akbar and his witty courtier, Birbal. Akbar had a strange hobby of asking many interesting questions from his courtiers to amuse himself.

One day, Akbar entered the royal court, settled in his royal chair, and asked his courtiers, “What punishment should be given to a person who pulls my moustache?”
The prime minister said, “He should be beheaded!”

The treasurer said, “He should be flogged!”

The chief of the army said, “He should be hanged!”
Everybody in the court suggested many extreme punishments for the culprit.
“What do you think, Birbal?” the Emperor asked Birbal.
Birbal kept quiet for a moment, and then said, “Huzoor, he should be given sweets!”

“What, Birbal? Have you gone crazy? Do you know what are you saying?”

Birbal replied politely, “I am not crazy, Jahanpanah! And I know what I am saying!”

“Then how can you suggest that I should reward the person who pulls my moustache?” the Emperor asked in anger.Birbal again replied politely, “Because, Huzoor, the only person who can dare to do this is your grandson.”

The Emperor was very pleased with Birbal’s answer and gave his ring to him as a reward.