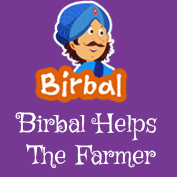 The farmer felt cheated and appealed for justice in the Emperor’s court. He narrated the entire incident to the Emperor and demanded the man to be taken to task for being dishonest with him.
The Emperor called Birbal and handed over this case to him. Birbal summoned the other man also in the court.

The cunning man realized that it was not possible for him to cheat the farmer anymore. He apologized to him for his trickery and withdrew his claim over the water of the well.