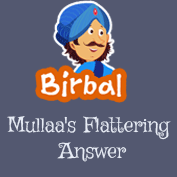 One day,When the Mullah Do-Piyaza was going back after having an audience with the Emperor, a small copper coin fell down from his pocket. It was the only money he had at that time so he started immediately searching for it. A courtier named Murad, who was one of his bitterest enemies at court, said, “Your Majesty, look at the Mullah! Did you see what a miserly he is? You have given him so many expensive gifts and bestowed plenty of money on him; still he is after a copper coin.”

The Mullah said quickly, “My dear friend is highly mistaken, Jahanpanah! It is not because of the value of the coin, that I am looking for it. I am looking for it because one side of that coin bears your resemblance, and I don’t want people to inadvertently step on it.”

Akbar was so pleased to hear Mullah’s reply that he took off his diamond ring and presented it to the Mullah Do-Piyaza.