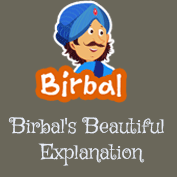 Birbal could easily make out from the Emperor’s face that he was not convinced with his reply. Next day, when the royal court met, Birbal ordered a guard to find and bring the most beautiful child in the world in the court next morning.

Next day, the guard brought one unattractive and ugly child with projecting teeth and unkempt hair and presented him before the court. “This is the most beautiful child in the world, Your Majesty,” said the guard.