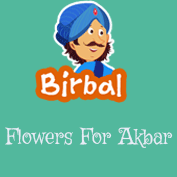 One day Akbar was strolling in his royal garden with several courtiers. It was spring time and the garden abounded numerous brightly coloured flowers.

Birbal was also there. He said, “I beg to differ, Rajkavi! Sometimes man can make much more beautiful things than this.”

Akbar chipped in and said, “No Birbal, Rajkavi is absolutely right. This flower is really very beautiful and I don’t think that there is anything in this world that can surpass its beauty.”
After a few days, Birbal presented a very skilled craftsman from Agra in the Emperor’s court. The craftsman presented a beautifully bouquet of carved marble flowers to the Emperor. The Emperor was full of praise for the intricate carving done in the bouquet, and gave him one thousand gold coins.

Just then a young boy came and presented a beautiful bouquet of real flowers to the Emperor. Akbar was very happy to see it too, and gave a silver coin to the boy.

Birbal was waiting for this opportunity only! He said with a meaningful smile on his face, “So, the man made thing was more beautiful than the real thing.”

Akbar understood what Birbal meant by that and smiled back at his witty minister.