You Are Here : Home » Fun » Stories » Akbar-Birbal » Akbar Birbal: The Rooster and The Hen 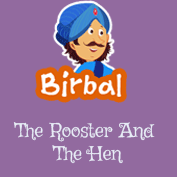 Once Emperor Akbar thought of a playing a trick on Birbal. He gave one egg to each of his ministers before Birbal reached the court.

When Birbal arrived in the court, the Emperor told everybody about a strange dream that he saw the previous night. He said, “A divine being appeared in my dream and said that I would be able to judge the honesty of my ministers by giving them a simple task. I must ask them to go to the royal garden pond and get an egg from there. Those who are honest, will find an egg there and those who are not, shall return empty handed.”

Then the Emperor directed all of his courtiers to go to the royal garden pool and bring back an egg. One by one, all his ministers went to the pond and returned with the egg, which the Emperor had previously given them.

Birbal also went to the pond and looked around for an egg. He even jumped into the pond but failed to find any egg. He soon realized that the Emperor was trying to play a trick on him. So, he thought for a while and then entered the court crowing like a rooster.

The Emperor asked him to stop making that irritating noise and produce the egg.

Birbal smiled and replied that only hens lay eggs, and as since he was a rooster, he could not produce an egg.

Akbar burst out laughing and understood that it was not easy to outwit his clever minister.