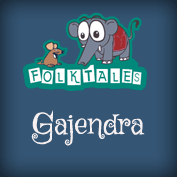 Gajendra Moksha or Gajendramoksham, is an important incident found in the Bhagavad Purana and it demonstrates the significance of ‘Bhakti’, prayer and true devotion.

Once there was an elephant whose name was Gajendra.He was the king of a huge herd of elephants. He had thousands of queen elephants and was proud about his position. One hot summer day, Gajendra went down the mountain with his family and friends to the foothills, where there was a big lake with cold water and many lotuses blossoming in it. Gajendra entered the lake to drink cold water.

He then decided to take a bath and started playing in the water. His activities disturbed the crocodile who lived there. Out of anger,the crocodile caught him by the leg and tried to pull him to the bottom of the lake. Gajendra, in spite of being an elephant could not break free. He struggled hard to get rid of the crocodile for years but all his efforts went in vain. Meanwhile, all his friends and queens abandoned him. Gajendra tried for a long time but soon he realised that only God could help him. Lord Vishnu heard Gajendra’s cries for help and appeared before him. He jumped down from the Garuda and dragged Gajendra and the crocodile out of the water. He then tore the jaws of the crocodile by his chakra (wheel) and saved Gajendra. Gajendra plucked a lotus with his trunk and offered it to the Lord to thank him.

Strange as it may seem, the crocodile then turned into a gandharva. His name was Huhu. He had been cursed by a sage that he would become a crocodile. In fact, the elephant had also been a king named ‘Indradyumna’ in his previous birth. As he was an ardent devotee of God, he had abandoned his kingdom. One day he was immersed in his worship when sage Agastya arrived there. For not getting his due welcome from the king, Agastya cursed him that he would become an elephant in his next birth. Both the elephant and the crocodile were freed from their curses by Lord Vishnu and taken to heaven.