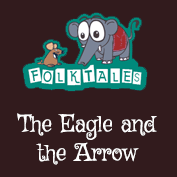 The eagle was very cunning and always got fun out of bothering the other small birds that flew in the sky. He teased and frightened the tiny birds. He would intentionally swoop down and pretend to catch the birds; the birds would quiver with fear and scatter away. Even at times when he was not hungry, he would play pranks to scare off the innocent creatures.

The eagle would burst into laughter every time a bird got scared with its prank. “You stupid creatures are so scared. Look at me… the whole sky is mine. I own the sky!” exclaimed the eagle proudly.
The other birds simply hated the eagle. Unlike the other eagles, he would swoop down on the birds, even when he was not hungry. He was very mean and cruel.

Once, the eagle noticed a flock of beautiful white pigeons flying gracefully in the sky. The eagle was very tempted to scare them. He suddenly came down swooping on them. The unaware pigeons were scared out of their wits and scattered away, fluttering their wings.

Suddenly, his ears caught the whizzing sound of something. He turned and looked and saw a very sharp arrow, moving speedily towards him. The arrow was actually meant for the pigeons, but by then all the pigeons had dispersed, scared by the eagle.

The sharp arrow struck the eagle in his heart. Bleeding profusely, he fell on the ground with a loud thud. “I don’t want to die so soon. I shouldn’t have scared the pigeons,” thought the eagle and slowly closed his eyes. The last thing that he saw was the arrow that was decorated with his own feathers.