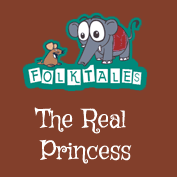 Once upon a time, there was a handsome young prince who wanted to marry a real princess. He was determined to find a real princess for himself so he travelled the entire world in search of one. He came across many princesses but there was always something or the other wrong about each one of them. It was also impossible for him to judge if they were real. At last he came back to his palace, sad and disheartened, unable to find a girl of his choice.

One evening there rose a frightful storm. The sky was filled with lightning and the thunder was so loud that it shook the walls of the palace. It was a dark and windy night. Suddenly the prince was awakened by a loud knock on the door. The king went out to open the door. Standing at the door was a beautiful princess. Her eyes sparkled like bright stars and her face was like that of an angel. But she was wet from her hair to toe and was shivering with cold. She said she was a real princess and had lost her way in the dark winter evening.

“We will soon find out,” the queen thought. She secretly went to a bedroom where she took off all the sheets from the bed and placed three tiny peas on the bed. Then she covered the bed with twenty mattresses and placed another twenty featherbeds over them. Then, she took the lovely princess to this royal bedroom and asked her to sleep on that bed.

The next morning, the queen asked the girl if she had a sound sleep. The girl replied, “Oh, not at all! I could barely close my eyes. There was something below my sheets. It was very hard and hurt me very badly. In fact, I have turned all blue and black with pain.”

The queen smiled and understood that the girl was indeed a real princess as she was able to feel the tiny little peas in spite of the twenty feather beds and mattresses placed over them. Only a true princess of royal origin could have such a subtle sense of feeling.

The prince finally found his real princess and they lived happily ever after.