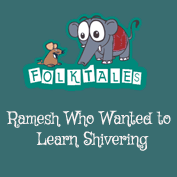 A cultivator called Shiva lived in a small village of Kerala. The village was known as Branthan Kavu, meaning mad people. He had two sons Rama and Ramesh. While Rama was a good son and learnt all the work, Ramesh did not know anything. Though his father kept urging him to learn cultivation, he never did anything.

One day, there was torrential rain with thunder and lightning. Everyone was scared of the thunder and was shivering with fear. But Ramesh was unperturbed. Everyone started asking him, “You are not even shivering, are you not scared of the thunder?” Ramesh replied, “I do not know how to shiver.” Some people tried to make him shiver—one of them pushed him in a well, the other screamed at him suddenly while he was not expecting and the third one danced in front of him wearing a tiger’s mask. But Ramesh was still not bothered.

Shiva got angry and said to Ramesh, “I think you should go out of this village and learn shivering. No one here can teach you how to shiver.” Ramesh agreed and went to a nearby town to learn shivering.

The following day the woodcutter took Ramesh to a nearby forest and tied him to a big tree. He left him alone all night. A number of animals wandered in the forest at night. A lion and a tiger also came close to him, but he did not get scared. Suddenly a huge black object fell on him but he was still not bothered. After sometime he went off to sleep peacefully. When he woke up, he found the woodcutter standing in front of him. He said to him, “I was not scared and did not learn shivering.” The woodcutter was surprised.

The next day, he took Ramesh to a local thief and told him that Ramesh wanted to learn to shiver. The thief asked him to come to his place alone at night. At night, the thief tried to scare Ramesh by painting his face with charcoal. He also pushed Ramesh to the ground and started climbing on him. But Ramesh pushed him down and started laughing. “What are you doing? You are looking so funny,” Ramesh said. The thief gave up and said, “You can only learn shivering by staying in the king’s bhoot bungalow for three days.”

Ramesh went to the king’s palace the very next day and asked for his permission to stay in the bhoot bungalow for three days so that he could learn to shiver. The king was initially reluctant but on Ramesh’s insistence, he finally agreed. “You can go there, but remember that it is very dangerous. You can take only three things that you want, with you in the bungalow,” the king said. Ramesh asked for fire, a broom and a big knife.

The king agreed and Ramesh went to the bungalow with all his stuff. He cleaned the place with his broom, lit a fire and sat near it. Gradually, it became dark. He suddenly heard the voice of some cats crying loudly. When he looked around he saw two cats approaching him. “Will you let us sit near the fire? We are very cold,” the cats said. Ramesh made them sit next to the fire. After a while, the cats told him that they wanted to eat him. Ramesh calmly told the cats to cut their nails first. The cats agreed and as soon as they showed him their nails, he caught them immediately, killed them with his knife and threw them in the fire. Just then, the clock struck twelve and nothing strange happened after that. The next day the king came to visit him and was surprised to find that he did not get scared.

Ramesh stayed there for the next night. Suddenly, at 10 pm, he saw a big cot moving into his room. He liked the cot and jumped onto it. The cot started shaking violently at midnight. Ramesh tied himself with the cot using his bed sheet and went to sleep. After some time, a bunch of eagles came into the room from nowhere, Ramesh asked them to come and play with him. The birds came closer to him and tried to hurt him. At once, Ramesh hit them with the broom and threw them into the fire. The next day, when the king came and asked him if he was afraid, Ramesh replied, “How can I be afraid? I have never been afraid.”

On the third night, while he was sitting by the fire, Ramesh saw four people bring a man into his room. The man was very cold and was screaming very loudly. Ramesh first rubbed his hands on the cold man’s body and then took him to the fire but the man did not stop screaming. Then Ramesh hugged the cold man tightly and went off to sleep. After a while, the four men came and took the cold man away.

The next day too, the king found Ramesh unperturbed. He was still not scared and had not learnt shivering. The king was impressed and got his daughter married to Ramesh. Eventually, Ramesh became the king. However every night in sleep, he would mutter, “I want to learn shivering.” One day, his wife got irritated. She packed some ice and a live frog and put it inside Ramesh’s shirt, while he was sleeping. Ramesh woke up with a shiver and started running all around the house as the cold frog crawled all over his body. He finally learned how to shiver.