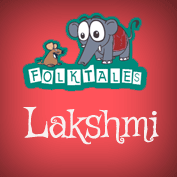 Goddess Lakshmi is worshipped by Hindus as the goddess of both spiritual and materialistic wealth and prosperity. Goddess Lakshmi symbolises good luck and the word ‘Lakshmi’ itself is derived from the Sanskrit word ‘lakshya’ which means goal or aim. On the full moon night of Kojagaripurnima, Durga Pooja is celebrated.

Goddess Lakshmi is personified as a beautiful woman, dressed in red and golden, with four hands, standing or seated on a Lotus, holding a lotus bud in one hand and showering gold coins from another.

The lotus bud in her hand signifies beauty, fertility and purity. Her four hands stand for the four virtues of life: righteousness(dharma), desire (kama), wealth(artha) and salvation(moksha). The gold coins falling from her hands represent the wealth attained by her worshippers.

Two elephants spraying water behind her symbolise that incessant effort, in agreement with one’s Dharma and governed by purity and wisdom, leads to prosperity—both spiritual and material.

Goddess Lakshmi is also a mother Goddess and is also referred to as Mata(mother). She is the female counterpart of Lord Vishnu and hence is also called ‘Shri’, the female energy of the Supreme Being.

The Ogre Of Rashomon

Panchatantra: The Wolf And The Lamb

How to Draw a Butterfly

One Hundred Nonsense Pictures And Rhymes-01 by Edward lear