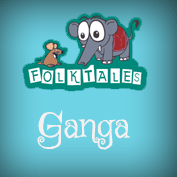 Ganga is India’s longest river. It originates in the Gangotri Glacier at Gaumukh in Uttrakhand at a height of 4100 km above sea level and covers 2525 km till it merges with the Bay of Bengal through Bangladesh. 25% of India’s water needs are met by Ganga.

Ganga is the most sacred river of Hindus and it is also worshipped as a Goddess.

Goddess Ganga is personified as a woman wearing white sari, riding a lotus, with pots of water in both hands and with her ride, a crocodile.

Any ritual which is performed on the banks of Ganga is considered to have greater effect. Its water, Gangajal,  is used in most rituals and is so sacred that people never dare to lie while holding it. According to the Puranas, a dip in Ganga purifies the soul and washes away one’s sins.

According to a common belief, people who die around this river go to heaven. People also conduct funerals near the river and disperse the ashes into the river as the sins get washed away and the deceased go to heaven. Ganga ghats of Haridwar and Varanasi are known for these holy funerals.

There are many mythological stories related to Ganga. According to one story, Ganga is in fact the sweat of Lord Vishnu’s foot and hence it is also called Vishnupadi. According to another, it is the sister of Lord Shiva’s wife, Parvati and according to a third one, Ganga was a devotee of Lord Krishna in heaven and Radha, being jealous, cursed Ganga to flow as a river on Earth.

Ganga Dashmi festival is celebrated every summer to mark the auspicious occasion of Ganga’s descent from heaven. People feed aquatic animals and take bath in the holy waters so that their sins may wash away. People offer sandalwood, flowers and milk to the Goddess and worship her by lighting lamps and incense sticks.