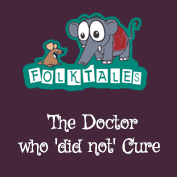 Once, there was an old woman who had lost her eyesight. She went to a doctor and asked him to cure her blindness. She also entered into an agreement with the doctor in the presence of some witnesses. She told the doctor, “If you can cure me completely of my blindness, I will pay you a handsome amount as fees, else I will not pay you anything.”

The doctor accepted the deal happily. He had a special ointment with him which when applied on the eyes for some time, restored the eyesight of a blind person. The doctor started visiting the lady regularly and applied the ointment on her eyes. There were many valuable articles in the old lady’s house. The doctor, however, knew that this lady could not see anything. So he gradually started stealing stuff from the lady’s house.

Eventually, almost all the valuables from the lady’s house were stolen, and when there was nothing left to steal, the wicked doctor finally decided to cure the lady completely and ask for his payment.

The old woman was treated and when she recovered her eyesight, she saw that all the valuables from her house were stolen. She was certain that it was the doctor who stole her things. She decided to teach him a lesson. When the doctor came to demand his fees, she refused to pay him and said, “I still cannot see anything, so there is no reason as to why I should pay you.” The doctor was surprised. His ointment has never failed before, and he knew it worked this time as well. So, both of them went to the court.

The judge heard both the parties and told the woman, “When you already had an agreement with the doctor, why did you refuse to pay him?” to which the old lady replied, “I made a deal that I would pay him his fees only if I regained my eyesight, but I haven’t. So why should I pay him now?”

The judge was surprised and asked, “How can you say so? All the people and your witnesses can see that you have regained your eyesight.” The lady replied, “No sir, I haven’t regained my sight. Because before I became blind, I could see a lot of valuable things at my place, but now I cannot see any of them. Then how can you say that I can see everything?” The judge agreed with her and declared that the lady was still blind and did not need to pay the doctor anything.