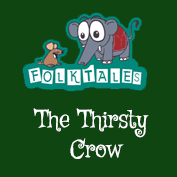 The wedding was full of fun, frolic and celebration. Once it was over, he wished his friend all the best for his life and started his journey back home. It was an extremely hot summer and his house was very far. He lived in Jaipur, Rajasthan.

Kancharam was exhausted with the long flight and was also very thirsty. He was frantically looking for water but could not find a drop anywhere.

He remembered that there was a severe drought in the Saurashtra district of Gujarat.

He had heard people complaining while he was flying over the district. Humans and animals were dying due to lack of water. People had complained that it was one of the worst droughts in 100 years. Many people left and went to different places in search of water.

Kancharam was drained of energy and his wings did not have any strength left in them.

Suddenly, he spotted a yellow pitcher from high up in the air. He was overjoyed and flew down to quench his thirst. However, he was highly disappointed. When he looked into the pitcher he saw that there was very little water at the bottom of the pitcher. The neck of the pitcher was very narrow and his beak was very short.

He tried his best but could not manage to drink even a drop of water. Exhausted due to the heat and thirst, Kancharam burst into tears.

After sometime, he again started looking around for water when he noticed a few pebbles lying on the ground.

An idea struck him immediately.

He picked up the pebbles and threw them into the pitcher one after the other.

Gradually, the water level of the pitcher rose. Kancharam was very thirsty, and tried very hard to bend into the pot. He could now reach the water. He drank the water breathlessly for the next two minutes.

Once he finished drinking the water, Kancharam’s energy was replenished. He started feeling better and flew away happily to his friends to tell them the story of his smartness.