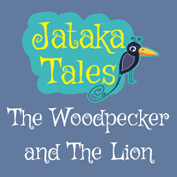 Another great story from Jataka Tales. Once upon a time, there lived a woodpecker and a lion. One day, the lion hunted a big bison and sat down to devour it. It so happened that while having his meal, a big bone got stuck in the lion’s throat. He was not able to remove it and was in great pain.

Soon the lion recovered completely and made another kill. The woodpecker also thought of joining the lion and asked for a small share of meat. To his utter disappointment the lion blatantly refused to share his meal and said, “How dare you ask me for more favours? I have already done so much for you!” The woodpecker did not understand what the lion was talking about. The lion then clarified, “You should be thankful to me that I did not gobble you up when you were taking out the bone from my throat. Now do not expect anything else from me and go away.” The woodpecker said to himself, “It was indeed a mistake to help such an ungrateful creature!”