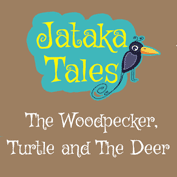 Another great story from Jataka Tales. Once upon a time a deer, a woodpecker and a turtle lived in a forest near a lake. The three were very close friends, and lived together happily.

One day a hunter came to that forest and was delighted to see the footprints of the deer near the edge of the lake. He decided to catch the deer, and set a massive leather trap near the lake. Late in the night, when the deer visited the lake to quench his thirst, he was caught in the hunter’s trap. He cried out for help. At once the woodpecker flew down from her tree-top, and the turtle came out of the water to see what had happened to their dear friend.

The woodpecker told the turtle to gnaw the leather trap with his teeth and set the deer free, while she flew away to find the hunter and keep him engaged. Soon, the woodpecker was able to locate the hunter’s house. As soon as the hunter came out of the front door, the woodpecker flew as fast as she could and struck the hunter in his face by flapping her wings.

The hunter was taken aback by the unexpected attack of a bird and rushed back into his house. His face was badly hurt, but he wanted to find out whether the deer was caught in his trap or not. So, this time, he left the house from the backdoor, hoping that the bird would not see him. The woodpecker was a clever bird. She was already waiting for the hunter to come out of his backdoor. As soon as the hunter came out, she again attacked him, flapping her wings in his face. The hunter once again scuttled back inside the house and lied down on his cot for a while.
It was getting difficult for him to wait any longer. So, he mustered up courage and decided to kill the bird if she attacked him again. He came out once again with a knife and dared the bird to come and attack him once more. This time the woodpecker flew back as fast as she could fly to her friends. She yelled at the top of her voice, “Beware my friends! Here comes the hunter!”

By this time the turtle had gnawed away most of the leather trap. The deer broke this last piece of the trap with all his might and ran into the woods. The woodpecker flew up to her nest in the tree-top. But the turtle, who had become very weak after gnawing the trap all night long, was unable to get away. The hunter picked the turtle, put him in a bag and tied it to a tree. The deer saw his friend being captured and in order to save the turtle’s life, he slowed down a bit and let the hunter see him.

The hunter seized his knife and started chasing the deer. The deer, keeping just out of his reach, led the hunter into the forest. The hunter was not familiar with the forest and got lost in the woods. The deer then took another way and reached the lake once again. Using his sharp horns, he tore open the bag in which the hunter had captured the turtle.

The turtle was alive and very happy to see his friend once again. The woodpecker also flew down to meet them. The deer then thanked both of his friends for saving his life and asked them to hide in the forest till the time the hunter did not go away for good. The woodpecker flew away to safety, the turtle hid in the lake and the deer vanished in the thick forest.

The hunter finally found his way out of the woods. He was very sad at losing the deer but was content that at least he had the turtle. When he reached the lake, he found that the turtle had also escaped. He cursed his stars, swore never to come back to that place again for hunting and left for his home.
The three friends lived together for the rest of their lives.