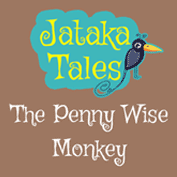 Another great story from Jataka Tales. Once upon a time, there lived a king who ruled over a rich and prosperous kingdom. But, the king was never happy with what he had and was always on a mission to expand his empire by conquering other kingdoms. One day, he set out on a mission to conquer a distant country. The king and his soldiers walked the entire morning in the forest. By evening, all of them were exhausted and thus halted near a lake to take some rest.

The horses were also tired, so the soldiers fed them some peas. A monkey living in the forest was eyeing the delicious peas being fed to the horses. He jumped down from the tree, grabbed a handful of peas and scampered back to the tree.

As he sat down comfortably on a branch and started to eat the peas, one small pea slipped from his hand and fell on the ground. Without thinking even once, the greedy monkey dropped all the peas he had in his hands, and ran down to look for the lost pea. Unfortunately, the monkey could not find that pea. He kept looking for the pea for some more time and then climbed back the tree empty handed. His greed had made him lose all that he had.

The king was watching the monkey with great interest. Wisdom dawned on him and he realised that his want for more may leave him with nothing one day. He said to himself, “I will not be like this foolish monkey, who lost much to gain a little. I will go back to my own country and enjoy what I have.” So, the next day he ordered his men to march back home.