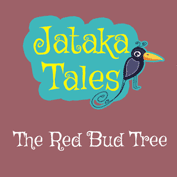 Another great story from Jataka Tales. This story dates back to the time when king Brahmadutta ruled the city of Banaras. He had four young princes. They young princes had grown up hearing many wonderful stories about a beautiful tree known as the Red Bud Tree. They had never seen the Red Bud tree and wished to be the first one to see it.

One day, driven by his curiosity to see the tree at the earliest, the eldest prince asked the king’s charioteer to take him deep into the woods where this tree grew. It was still early spring and the tree was standing as a bare stump of wood in the forest, devoid of any leaves or buds. The prince failed to understand why it was known as the Red-Bud tree and returned back to the palace.

Sometime later in spring, the next son requested the king’s charioteer to take him to the Red Bud Tree. At this time, the tree was covered with bright red buds and looked very beautiful.

The third son went into the woods just after the spring time. Now tree did not have any red buds and was covered with lush green leaves. He also could see no reason for calling it a Red Bud tree.

The youngest price also decided to go and have a look at the famous Red Bud tree. By this time, the tree was covered with little bean-pods. When he came back from the forest, he ran into the garden where his brothers were playing and told them with much excitement, “I saw the Red Bud tree!”

“So, what is special about it?” said the eldest prince. “It is nothing but a dead stump of wood,” He added.
“What makes you say that?” said the second son. “When I went in the woods, it was covered with hundreds of beautiful red buds. This is why it is known as the Red Bud tree.”

The third prince said, “I have also seen the Red Bud tree. It is neither a dead stump of wood nor covered with red buds. It looks like an ordinary tree covered with green leaves.”

The youngest prince said with utmost confidence, “Brothers, all of you are mistaken! I have just a seen the tree and I can say for sure that it is now covered with little bean-pods.”

The princes wondered that maybe the Red Bud tree was indeed some mystical tree and appeared in different forms before different people. The king was overhearing their conversation. When they stopped talking, he came out and said, “My dear sons, all four of you have seen the same tree, but each of you saw it at a different time of the year.” The princes understood what the matter was and laughed at their naiveté.