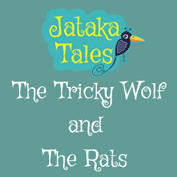 Another great story from Jataka Tales. Once upon a time, there lived a big rat in the jungle. He was very wise and powerful and headed a large group of rats. A crafty wolf also lived in that jungle and intended to catch the entire group of rats.

One day, a bright idea struck him. He went near the place where the rats lived and waited for them to come out. As soon as he saw the rats coming out of their hole, he stood on his hind legs and opened his mouth wide. The rats were surprised to see the wolf standing in this strange posture.

Out of curiosity, the chief of the rats asked the wolf, “Wolf, why are you standing on your hind legs?” The cunning wolf made a long face and answered, “Dear friend, I am lame since birth. It hurts me to put my front legs on the ground. That is why I do not have any other option but to stand like this and suffer.”
“And why is your mouth open?” asked the chief of the rats. “Since I cannot walk or move, I survive only on air. I keep my mouth open to take in as much of air as I can. I think, I have been punished for my previous karmas. I must have done some wrongful act in the past life because of which I am suffering like this in the present birth. I now intend to spend the rest of my life only in meditation.” said the wolf gloomily.

The rats felt very sorry for the wolf. They decided to visit the wolf everyday and spend some time with the hapless animal. The wolf also kept them entertained with his sermons. Each time, as the rats left, the wolf used to catch and eat the last one. Then he quickly wiped his lips, and acted as if nothing had happened.
Soon, the number of the rats in the group started to decline and this also came to the notice of the chief of rats. He evaluated the situation carefully and came to the conclusion that perhaps it was an act of the wolf. He, however, did not have any proof.