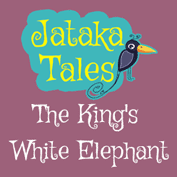 Another great story from Jataka Tales. Once upon a time, there lived a herd of eighty thousand elephants at the bottom of the majestic Himalayas. Their leader was a majestic white elephant who was extremely kind-hearted. He dearly loved his old and blind mother and took great care of her.

Then one day, he decided to abandon the herd and go with his mother to Mount Candorana to live in a cave beside a beautiful lake that had lovely pink lotuses.

It so happened that one day, a forester from Banaras lost his way in the forest and was absolutely terrified to find himself alone in the thick woods. He was weeping bitterly and desperately looking to find some help. The white elephant took pity on the man and promised to help him. He knew every inch of that dense forest and showed him the way out to Banaras city. The forester thanked the white elephant and happily went home.

That night when the white elephant did not return home, his mother was very worried. She had heard all the commotion outside and had guessed that the king’s men must have taken away her son. She just lay down in her cave and cried bitterly.

Meanwhile, the white elephant was led in to the beautiful city of Banaras where he was given a grand reception in the royal elephant shed. The keepers had laid out a feast for him and decorated the stable with fragrant flowers. But, the elephant neither touched the food nor seemed to be impressed with the beautiful and comfortable shed. He just sat there with a sad expression on his face.

The matter was reported to the king. The king came to visit the white elephant and find out what ailed him. On questioning, the white elephant told the king about his blind old mother. He expressed a desire to go back to her as in his absence she would not be able to sustain herself and die.

The compassionate king was touched by the elephant’s story and asked him to return to his blind, old mother and take care of her as he had been doing all along. The happy elephant went running home as fast as he could. His mother could immediately recognise the scent of her son and was overjoyed to have him back. She blessed the kind king with peace, prosperity and joy till the end of his days.

The white elephant took good care of his mother till the day she died. The king often used to come and visit him in the forest. And when the white elephant died himself, the king erected a statue of him by the side of the lake and held an annual elephant festival there in his memory.