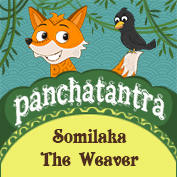 Once, a weaver named Somilaka lived in a town. He was a very good weaver. The cloth he wove was fine, soft and beautiful. Even the king praised his work. In spite of this, Somilaka somehow could never earn much money. The other weavers who were not very good at their job were also richer than Somilaka. This depressed Somilaka very much. He thought of trying his luck in another town, but even there he did not meet with much success. In the end, Somilaka was so frustrated that he decided to commit suicide. He made a noose out of a rope and put it around his neck, tying the other end of the rope to a tall tree. He was just about to hang himself when he heard a loud voice coming from heaven, “Wait, don’t commit suicide. I am God. I am pleased with your talent and good work so I have decided to grant you a wish. Tell me what you want.”

Somilaka was astonished. He said, “I want wealth.”

God replied, “But you don’t need more wealth than what is required to keep you clothed and fed. What will you do with more wealth?”

Somilaka answered, “I still want more wealth. A wealthy man is respected by everyone, even if he does not spend his wealth.”

God said, “Alright. I will grant your wish. But first, you must go to your native village and visit two traders who live there—‘Secret Wealth’ and ‘Useful Wealth.’

Somilaka did as he was told. First, he decided to meet ‘Secret Wealth.’

Somilaka paid a visit to the house of ‘Secret Wealth.’ ‘Secret Wealth’ did not give him a cordial welcome, instead he seemed annoyed. His wife served food to Somilaka in a broken plate and banged a glass of water next to him on the floor. Somilaka did not say anything. He just thanked ‘Secret Wealth’ and his family and left.

Next, he went to visit the other trader—‘Useful Wealth.’ ‘Useful Wealth was very happy to see Somilaka and welcomed him warmly into the house. All his family members were also very cordial to Somilaka. They served him delicious food and made comfortable arrangements for him to spend the night.

Next morning, Somilaka saw the king’s servants bringing money for ‘Useful Wealth.’ He pondered over the contrast between the two traders. He thought, “This man is not as wealthy as ‘Secret Wealth,’ still he enjoys his wealth and lives more comfortably than ‘Secret Wealth.”

Somilaka had understood the fact that wealth must not be merely hoarded; it should be used properly. When necessary, it should also be donated.

Somilaka’s wish for wealth was granted by God and he enjoyed his wealth to the fullest, using it and also sharing it, just like ‘Useful Wealth.’