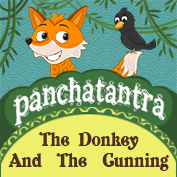 Once upon a time, a foolish donkey used to live in a small town. There was a forest near the town where many wild animals lived. The king of the jungle—the lion also lived in the forest along with his minister, a cunning fox. Now it so happened, that a few days back, the lion had got into a fight with a wild elephant and was badly injured. The lion was weak and wounded and was unable to go and hunt for his prey himself. So, his minister, the fox was in charge of bringing food for the lion.

Like every day, the fox set out to hunt for prey, so that he could bring back food for his master. He had not gone far when he saw the donkey. The donkey was looking nervous, foolish and hungry. The fox walked up to him and said, “Hello! You seem to be new here. Where have you come from?” The donkey replied hesitantly, “Yes, I have come to the forest for the first time. I used to live in the nearby town. My master, the washer man, used to make me do a lot of work and gave me hardly anything to eat. So I have run away from his house in search of a better place.”

The fox realized that this was his chance. He said cheerfully, “You have come to the right place, friend! I am a minister of this kingdom. Our king is looking for a bodyguard for his palace. He wants to give the job to someone who has experienced town life. You will have a very comfortable life here, living in the palace and feeding on the fresh, soft grass that grows around the palace.”

The donkey was very happy on hearing this and he agreed to follow the fox back to the palace at once. When the lion saw the fox leading a donkey to the palace, he became very impatient with hunger. He pounced upon the donkey immediately and grabbed him. Due to his injuries and constant hunger, the lion had lost much of his strength and so he could not overpower the donkey. The donkey freed himself and ran as fast as he could.

“My Lord,” the fox said to the lion, “You have scared away your prey. You should not have attacked him in such a hurry.”
The lion was disappointed. “See if you can manage to bring him back,” he said to the fox.

So, the fox ran behind the donkey and at last, caught up with him. “Why did you run away, you fool?” he said to the donkey.
“Of course, I had to! Your king would have eaten me up,” the donkey replied.
“Oh you silly fellow, that was just a test of your alertness for the job of the royal bodyguard of the king. If you had not shown alertness and quick reflex action, the king would have rejected you for the job. Come back with me to the palace now.”
The donkey believed the fox’s story and followed him back to the palace. This time, the lion was hiding behind some thick bushes. As soon as the donkey passed by these bushes, the lion pounced on him and killed him.

The lion was very pleased with himself. He thought of feasting on the donkey right away. Just as he was about to start eating, the fox said, “My lord, you are going to have a meal after a long time. Shouldn’t you take a bath and say your prayers first?”

“Yes, you’re right,” the lion replied. “Stay here till I get back”
While the lion was gone, the fox ate up the whole of the donkey’s brain. When the lion got back and began eating, he noticed that the donkey’s brain was missing. He questioned his minister about it angrily. “Where is the donkey’s brain?” he roared. The fox replied, “The donkey’s brain? But, Your Majesty, you must be aware that donkeys don’t have brains. If this creature had a brain, do you think he would have come back with me to the palace after being attacked the first time?”

“Yes, you have a point,” said the lion and resumed eating.
Thus, the fox managed to fool not only the donkey but also the lion with his cunning arguments. It is true that sometimes, a cunning argument can outwit normal intelligence.