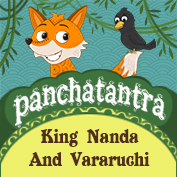 Here’s another great story from the Panchatantra.
A long time ago, there lived a brave, strong and powerful king named Nanda. He was respected by the kings of neighbouring kingdoms and his fame was widespread.

There was a minister called Vararuchi in King Nanda’s court. He was a learned man, an expert politician and a Sanskrit scholar.

One day, Vararuchi’s wife was very annoyed with him. Vararuchi loved his wife dearly and wanted to please her. He asked, “My dear, what’s the matter? Why are you angry with me? I will do anything to make you happy.”

Vararuchi’s wife replied flippantly, “Really? If you really want to make me happy, shave your head and fall at my feet.”

Vararuchi did exactly as his wife desired. She was happy and they were on normal terms again.

The same day, King Nanda’s wife was also angry with her husband for some reason. King Nanda, too, was very attached to his wife and wanted to keep her happy. He said, “Tell me what I can do to make you happy, dear.”

King Nanda’s wife replied, “I want to put reins in your mouth and ride you like a horse. You will have to neigh like a horse too.”

The king did exactly what the queen wanted. The queen was happy and things became normal between them.

The next day, when Vararuchi went to meet the king in his court, the king saw his bald head and said laughingly, “Why have you shaved off your head all of a sudden, Vararuchi? What is the reason for that.”

Vararuchi replied, “My Lord, it is the same reason for which you neighed like a horse yesterday.”

The king was left speechless.

It is true that one can do anything for the person who is dearest to one.